0
was successfully added to your cart.
Press enter to begin your search
AscensionUncategorized

Ascended Living.Letting go of the Old World.Taking the leap — for good.

Welcome living in the Unknown.
Hello magic, liberation, self regeneration, and full command over my physical body.

WOW…
The energies where quite intense over the last month, and I was continuously faced with and created situations for myself where I was presented with the opportunity to let go entirely of the old 3D world. What was interesting for me is that I thought I had already let it all go. I thought I was already living in the new earth, but realized that I was going back and forth, and now with this one final sweep I am taking the leap and taking my body with me — that is why this was so intense for me [oh my goodness], not to mention all the solar flares.

Being conscious of what I was doing, very present with making the choice in each moment of choosing to stay, or go and move forward, without anything to hang onto, or any security of knowing what’s next, but believing in the unknown. This to me was much more attractive than the live(s) I have lived before.

The other thing is the continuous disappointment that I was facing — feeling and releasing for all the efforts that I would put out, and never feeling like I was anchoring in anywhere. It makes so much sense now as to why I could not anchor until I took the leap and until it was my turn — as up until now I was holding the space and light.

Keeping the vibe high, the thoughts high and space cleared, it was one battle after another — not with fighting — but from warrior strength. Not by force, but by conscious response and love — unconditional love. That takes a lot of conscious awareness and claiming my full Love power as a sovereign, free being. I am taking it to the edge one more moment and one more day, and my choice was and is: I will never give up on US.

We came here to liberate ourselves and bring Gaia and her people into freedom, and she shall have that!

Looking back at the last 45 days…
on September the 6th, a small group of my close allies and I where in Seattle with our Peace signs.

We launched the Peace Campaign on Indiegogo, September 7th, which ran for the next 45 days until my birthday. I had to hold that energy strong every single day. To make the choice to stay present with this energy for that length of time was absolutely exhausting and liberating. I know that peace is just the beginning for this planet, and in writing this book, Peace, the Flip-Side to Anger, I too was able to release my own anger, and the many feelings of powerlessness I felt within me. I feel that is what a lot of the anger is about for others, as well — feeling powerless to do anything about the giant “elephant”. Releasing the feeling of powerlessness and taking action from a new space requires a huge amount of courage. Get your copy of this powerful practical two-step guide on how to release your anger and claim your truth and power in any situation. It’s called Anger Management 101, and you can find it here. 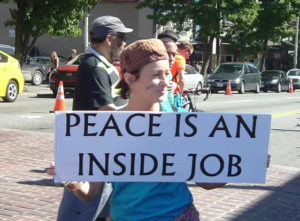 I found myself in many different situations where I chose to release the victim in me time and time again, until one day I was faced with the biggest advisory and released the victim in me once and for all. I thank all who played their roles so perfectly — the light and the dark — in perfect support for me. Planting the seeds of Peace during a time when there is so much war and chaos is an enormous accomplishment. Job well done! The ending numbers of the campaign are:

We should have the book published and printed by the end of November, and now the fun begins of recording the rap song. I am so excited about that!

Two weeks before the campaign was over, I saw the interference that I had not looked at before. I saw there was an energetic shield placed onto the campaign, and now again I felt powerless to do anything, which was another wonderful opportunity to release feelings of powerlessness, and then take action. My first thoughts were that I can’t do anything about it. I thought to contact someone I previously worked with that knows how to work with these dark energies, when I realized not to pass this off to someone else, but to do it myself. This is what this was about for me: not to give up, or lay down, or to rely on someone or something to save me.

By infusing this low energy with love and compassion for the souls that agreed to embody this energy and not be in judgment about it (being in unconditional love and acceptance in every moment), shortly thereafter I saw and felt a change — that was good.

Anyplace where I found myself the victim, I took the opportunity to claim my Love power. Anyplace where I was faced with a fear required being in full charge and full command over my life — not making choices that are victim based, fear based, or survival based.

Congratulations, and hats off — that is huge!

The significant and symbolic days.

Wednesday, October 22, 2014.
I waited to go to the DMV until my birthday, in order to turn in my about to expire license of the old world and renew my drivers license on purpose, for the new earth (5D). When I arrived that morning and walked into the office, I noticed there was nobody there — only the workers behind the counter.

This is so symbolic to me, being in the new earth, on my birthday, knowing what I was doing – it was so much fun.

They all looked at me when I walked in. I walked right up to the counter, and the lady pointed me to enter lane 3. I walked up, paid for my license and had my picture taken — all within 5 minutes. Never in my live(s) have I had that experience.

That Wednesday night my body was deeply affected by the massive solar flares, and I felt like was hit by 10 Mack trucks — but still moving, still walking, still vibrating. I felt like I was in shock and I thought I was going to lift off.

I always love the poetry:

Rainbow Warrior Awaken!
Your tapestry is complete.
Many lessons you have learned,
The place you rest now is sweet.
A new world is unfolding now,
that you have bravely attained.
Know the truth of who you are,
Your awakening has been gained.

Thursday 10/23:
I knew that I had to give myself space and time to integrate this new way. My body was begging me for solitude, to be quiet, and integrate these flares and really take notice at all the blessings that came from the eclipse — this new awareness, and this new way of being and receiving. I canceled my appointments. I was scheduled to do a new venture with someone and I did not feel I could start anything new until I rested and integrated this huge epic experience, and of course that is what I love and value about my life that I have created — the freedom to do that.

The amount of peace and pleasure I am feeling in my body is very, very new. I feel so much love and so much “awe” in this new space, and now the building begins. The new foundation, I have been outlining several new ways I am moving forward, and how I will creatively share my gifts with the world. I am so excited about the new creations unfolding.

I AM coming Home.

So much gratitude and love for the embodied soul.